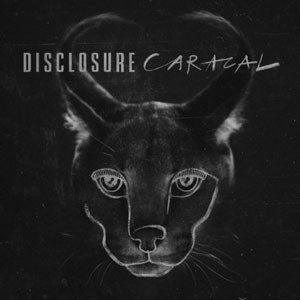 Between 2012 and 2013 the Lawrence brothers ruled the pop-dance roost with their continuous drip-feed of uplifting second wave UK garage crossover club / chart hits, culminating in debut long player 'Settle'. For 2015 Guy and Howard return with another bucket list of guest vocalists on new album 'Caracal' (named after their favourite wild cat, obviously). Having gone from teens to early twenties since their first releases, the pair's musical sound palette has matured likewise, with R&B and pop-soul muscling in next to their previous all conquering UKG template.

'Caracal' opener ' Nocturnal' is a luxurious slo-mo house number featuring The Weeknd's Tesfaye, Sam Smith, whose career was launched on the back of Disclosure's 'Latch', returns to the fold with yacht-pop-tinted (in my head anyway!) 'Omen'. Having just had a massive club hit with ' Liquid Sky', soul-jazz singer and balaclava fancier Gregory Porter is the perfect voice to grace upbeat house number 'Holding On', with Lion Babe doing similar for ' Hourglass'. New R&B singer Kwabs drapes his soul vox over beatdown moocher ' Willing & Able', while Lorde tops tropical house chugger 'Magnets'. Other guests include Miguel on ' Good Intentions', Nao on the hip hop-soul banger ' Superego' and Aussie newcomer Jordan Rakei on R&B ballad ' Masterpiece'.

So, all in all not a million miles from 'Settle', 'Caracal' sees Disclosure still flying the flag for the soulful end of pop-dance, which is a good thing to these ears.