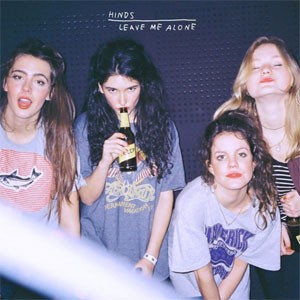 Since bursting onto the DIY scene last summer, Hinds - Ana Perrote, Carlotta Cosials, Ade Martin and Amber Grimbergen - have mastered a raw and playful sound all their own. With just a handful of released singles under their belt, Hinds have already earned early support from BBC Radio 1, BBC 6Music, NME, Guardian, Beats 1, Pitchfork, Rolling Stone, The FADER, Gorilla vs. Bear, and many more. Now with the release of their eagerly awaited debut album, Hinds are firmly establishing themselves as one of the most exciting emerging acts of the year and show no sign of slowing down.

Kicking things off with their new single “Garden,” Hinds take us on a badass rock & roll ride on their debut full-length Leave Me Alone. Weaving sun-kissed, 60’s-inspired melodies, executed with a genius call-and-response between co-vocalists and band co-founders Perrote and Cosials, Hinds create the ultimate soundtrack to the best day ever - from start to finish - spent with your four best friends. In addition to previously released fan favorites including the band’s first-ever single “Bamboo,” “Castigadas En El Granero” - which translates in English to “Grounded In The Barn” - and the band’s first new song of 2015 “Chili Town,” Leave Me Alone only gets better with each song. Featuring bright surf-pop tune “San Diego,” the mixed-tempo “Fat Calmed Kiddos,” and a bitter ode to shitty boyfriends in “And I Will Send Your Flowers Back,” Leave Me Alone is guaranteed to bring the Mediterranean sun to you wherever you are in the world at any time of the year.

“Loud, spiky and infectiously happy…(they) have a smack of the Velvet Underground and ramshackle riot grrrl bands” – Time Out

“a lackadaisical, whimsical 60s garage-pop tune that’ll snog your face off and then nick your ice-cream afterwards.” – The Guardian

“The chillest four-piece in rock hail from Madrid, and write choruses so loose and lovely you’ll want to wear them in like a favorite pair of sneakers.” - The FADER

Laura says: Infectious pop hooks but delivered with a kind of ramshackle, lo-fi cool rather than the hi-gloss synth-pop sheen of many bands at the mo. Guaranteed to set your toes tapping and bring a smile to your face.