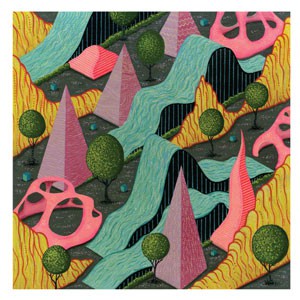 Jack Cutter is a songwriter and guitarist based in the San Francisco Bay Area in California. He started with a $5 banjo just after finishing high school. In University, during the late 60’s, he performed with bar bands in Buffalo, New York. After completing University and a year as an Aerospace Engineer, he decided that attack helicopters were not really what the world needed and so he headed off to California in pursuit of music and mystic times.

Fast forward to Fall 2014: Jack is playing his quintessential tune, ‘Gift of Our Fathers’ in the SF BART subway to an onslaught of morning commuters when he was spotted by 40 Thieves. Eureka! Love at first sight and in the next few months, two of Jack’s original acoustic pieces were given the 40 Thieves treatment.

Enter David Sanderson aka David Harks, a singer, songwriter, producer and label curator from East Sussex. “Having fallen in love with the cosmic boogie (of 40 Thieves classic ‘Backward Love’) I really felt I would love nothing more than to write a tune with them. Layne got back in touch with a track he was working on entitled Serpent Strut with Jack Cutter and we worked via email over a few months to brew up that misty soul.”

Deep, stony, psychedelic, drawing from the well of Hawkwind, Joni Mitchell, David Crosby, Baffo Banfi and Tolkien-tinged acoustic Led Zep, the proof of concept is now complete and in the capable and loving hands of Claremont 56.