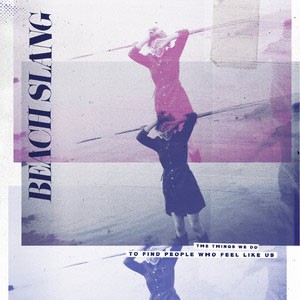 We've been waiting for a while and finally it's here. Over the past two years Beach Slang have proved themselves as a band who can write memorable songs, share that energy live and create a community of like-minded fans but they've always been missing one important element: An album. Luckily the band's full-length The Things We Do To Find People Who Feel Like Us is the culmination of their collective career and picks up where their two critically acclaimed 7-inches left off.

The feelings of youth and vulnerability lie at the core of Beach Slang's music, which is part punk, part pop and all catharsis. It references the ghosts of the Replacements but keeps one foot firmly rooted in the present. It's fun and it's serious. It's sad but it isn't. It's Beach Slang. This Philadelphia-based act have built their hype the old-fashioned way, without any gimmicks or marketing teams, which makes sense when you consider that frontman and writer James Alex cut his teeth in the celebrated pop-punk act Weston while drummer JP Flexner, bassist Ed McNulty and guitarist Ruben Gallego also played in buzzed about projects such as Ex-Friends, Nona and Glocca Morra respectively. However there's something indefinable about Beach Slang's music that evokes the spirit of punk and juxtaposes it into something that's as brutally honest as it is infectiously catchy.

Pitchfork: “Everywhere you turn, breathless rhythms crash headlong into blaring, yearning leads, a perfectly outsized complement to the widescreen, fucked-up-and-loving-it sentiments” “It's a goddamn shame that no radio station is going to give this the kind of airplay it deserves”

Noisey: “So it’s not inaccurate to call Beach Slang a “buzz band” given how quickly they caught fire and became media darlings. But unlike many buzz bands, Beach Slang really does live up to the hype”. “With the excitement built around it, we’re just going to go ahead and say it: Beach Slang is the best new band of the year. And we’re not afraid to call “first” on that”.