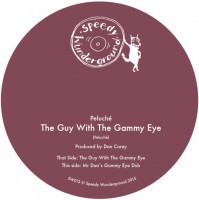 Renowned for its studio-to-pressing-plant fleetness, three-piece Peluché have achieved something of a feat by becoming arguably the ‘quickest’ ever Speedy Wunderground release.

In less than a week the label had received the track, caught the band’s eccentric live show, recorded the single at Dan Carey’s south-London HQ (all recording done in a day according to the time-honoured Speedy Wunderground ‘regulations’) and despatched the results to the pressing plant.

Coming after their well-received recent single ‘Sin’, Peluché showcase reverb-laden, Felt inspired guitars to open ‘The Guy With The Gammy Eye’ – before a frenetic twisting and uprooting of their natural melody up heaves the track in all manner of mesmeric directions.

“Dan is a producer we've wanted to work with for ages - we all love his style of production. We were really excited when he came down to see us play and invited us to record at his studio.  The song was recorded live, and on tape, which meant we didn't have many chances to get it right! Dan really captured the energy of the song and played an unusual instrument called the Swarmatron, which is featured on all the Speedy Wunderground sessions and sounds like a swarm of musical bees flying over the track.”