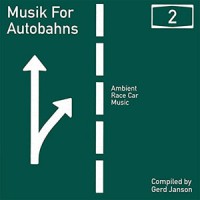 So, what awaits us on the second edition of a compilation sub-titled “Ambient Race Car Music”? A fresh and exclusive collection of music that hopefully sounds as great in a car as it will in the comfort zone of your own living-room or even in a club. Inspired by the journeys on the Autobahn to and from Frankfurt and Heidelberg as an adolescent, Gerd Jansen decided to get some of his favourite producers to create exclusive house, techno and motorik music for the motorway. From Leon Vynehall and his profound research of the BAB 5 to Joy Orbison’s “A 213” or Lauer’s heartfelt and wry Kraftwerk pastiche, all of the tracks have a certain compatibility in common or just sound great, while having a drive. “Breaking” by AKSK for instance made the stop-and-go traffic in the blazing heat of Los Angeles so much more bearable.