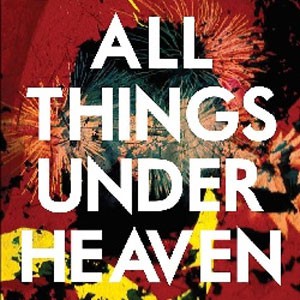 BRAND NEW album from legendary LA firestarters, The Icarus Line. Their third full length release for Agitated (their eigth album in total), following on from their imperious return to the fray in 2013 with the much lauded release of 'Slave Vows', followed up by its companion "album release" 'Avowed Slavery' in 2014.

Recorded and arranged live as a group in Cardamone's studio, Valley Recording Company in Burbank, the sessions "were very private and conducive to conjuring," the frontman describes. "If you are lucky, you can capture something before it dies. I feel like all great music is a fleeting inspiration. You only have so much time to capture it before it either turns into routine or it turns its back on you."

Art work for All Things Under Heaven was found during the making of the record. Veteran news photographer Randy Taylor was receiving attention for some works of his that were created out of destruction. During the Sandy hurricane his archive was flooded and many of his photos were "destroyed". The pictures that would make up the record's sleeve were simply a document of a 4th of July cookout but after the waters of Sandy they became the american dream in a car crash with mother nature. The perfect visual to compliment a document about a melted american dream.

All Things Under Heaven packs the kind of swagger, raunch & ascent that would make Iggy Stooge and Sun Ra proud parents. It is a record that expands the vocabulary of what rock music can be without sacrificing the critical spirit that makes it Rock N Roll. The Icarus Line have summoned up the demons from the past, paid their homage and taken the sound in an entirely new direction; because this band are never ones to be caught on their knees. The album is a sprawling sonic landscape that has a timeless quality about it as it traverses between low valleys, towering skyscrapers and all the dirty alleyways that connect them. It's a record that's as sprawling as the city of Los Angeles to which The Icarus Line have always called home. It's a fuck you to the bite size society that has become music consumption. Life is bigger than that. And just like LA, this is a record that from the opening hollow echo swallowed pounding drums of "Ride Or Die" to the final free jazz funeral lullaby of "Sleep Now" is all its own world.

The Icarus Line have been deep in the rock 'n' roll trenches since their debut album Mono in the late 90s, yet sound more significant now than ever. Over the years The Icarus Line have proved to be one of the most exciting and unpredictable live bands around, again and again. Their performances are explosive, dangerous and sexy all at the same time.

"Joe Cardamone slanks in a room like some sick fuck who actually knows how to live on the street, instead of pretending that he still does," writes Permanent Midnight author Jerry Stahl. "Walking down Vulnerable Hardass Ave " the one where OG rock'n'rollers, the early eat-their-arms screamers and bar walkers that paved the way for posers and haircuts to come, first started screaming out the truth that was eating them alive."

Barry says: As brash as ever, The Icarus Line return to the fore with this, their latest outing since 2013. All Things Under Heaven sees the band in a more grungy, punk-influenced mood. Snarling vocals, and screaming call-to-arms refrains atop driving distortion and thumbing kick drums. Never likely to be accused of being boring, this is a new direction from a band that can do no wrong. A Political noise-punk statement, and a righteous performance from one of the greatest post-hardcore bands of all time.