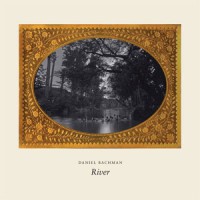 Every major record released by Daniel Bachman has rightly been greeted by critical acclaim. Starting with 2012’s Seven Pines and running through 2014’s Orange Co. Seranade, each album has been lauded as his best release to date. In each of these instances, the critics have been correct. Even more impressive than the breadth and depth of each album has been the fact that Bachman has continued to top himself with respect to composition, technique, instrumentation and artistry on such a consistent basis. Given this sort of track record, what can we expect from River?

Simply stated, River is Bachman’s best album. Everything written previously by the critics about his albums applies once again with one change: he just got better. Unconventionally, it opens with the breathtaking and robust fourteen minute epic “Won’t You Cross Over To That Other Shore.” Proving his ability to write music that keeps the listener engaged (even across such a long tune), Bachman successfully uses tempo changes, varied picking patterns and melodic exploration, all without ever getting lost in pointless improvisation too far from the overall theme.

Bachman has always been quick to have his music serve as a homage to his musical and geographical roots in Virginia. River is no exception. Here he tips his hat to Jack Rose (“Levee”) and William Moore (“Old Country Rock”) through his interpretations of their songs. Bachman’s playing and flourishes on these tracks simultaneously acknowledge the influence each of these men has on his development and style. His love for old American music and deft skill at adapting traditional tunes allows listeners of all levels of sophistication to feel welcome at his musical table.

Whether one is newly discovering the world of American primitivism, or is already deeply into the experimental world, Bachman’s playing draws the listener in and takes them places.

On three of River’s successive tracks – “Farnham,” “Song For The Setting Sun I” and “Song For The Setting Sun II” – Bachman takes the listener on an aural journey through the back roads of the foothills of the Blue Ridge to calm coastal waters. Much like driving by a stunning vista and feeling compelled to pull over and take it all in, “Song for the Setting Sun I” continually surprises with a beautiful set of melodies that cause you to stop anything else you are doing in anticipation of how the music will continue to unfold. This track alone demonstrates the leap that is River in Bachman’s maturity of both artistry and compositional understanding. The album closes with a reprise of “Won’t You Cross Over To That Other Shore.” As its notes play out, it is almost certain that you will continuously hum one or another of the album’s rich melodies long after play has ended.

Over the course of the last several years Daniel Bachman has stepped out of the shadow of influential solo guitarists past and present. River, the definitive document of his skill and talent, proves that Bachman is pushing the boundaries of solo acoustic guitar.

My BubbaGone / You're Gonna Make Me Lonesome When You Go