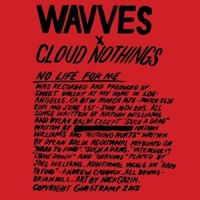 No Life For Me is the highly anticipated collaborative album between Nathan Williams of Wavves and Dylan Baldi of Cloud Nothings via Williams’s own imprint, Ghost Ramp. The album was recorded at Williams’s home during sessions in March and June of 2014, with production from Sweet Valley.

“For all their differences, a Wavves / Cloud Nothings collaboration makes a good deal of sense, and fans have been eagerly anticipating an album since it was officially announced back in March…. [The album] is a summery slice of punk that’s more SoCal than Ohio, even if Baldi can’t help but smear his unique brand of melancholy all over standout tracks like ‘Nervous’ and ‘Nothing Hurts’…. “No Life For Me is deeply indebted to early 1980s Southern California punk, a scene that’s probably buried deep in the soil of Williams’ mind by this point…. This is pop music executed with the no-frills precision of hardcore….” - Consequence of Sound.