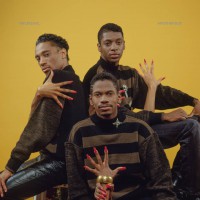 Originally dropped on Jack Trax back in 88, "Another Side" collected together the finest moments of the mighty Fingers Inc, and became the seminal Chicago house album on the way. Resurfacing occasionally over the last fifteen years in less than official form, the LP has always caused a wave of excitement, and now, a quarter of a century after its original release, Larry Heard has remastered and repackaged the set for an official outing on his own Alleviated imprint.

A studio collaboration between house originator Larry Heard, Robert Owens and Ron Wilson, Fingers Inc served up some of the deepest, most soulful  house ever heard, and it's all on this LP! The proto house/club soul sounds of opener "Decision" and deep and spiritual "Bye Bye" keep things light and euphoric, while cuts like "Never No More Lonely", "Feelin Sleazy" and "Music Takes Me Up", head deeper, darker and filthier into the realm of acid house. Flawless from start to finish, this is an essential item for any true house head.