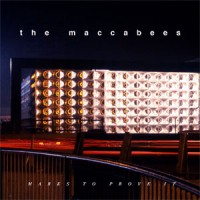 Fourth and best album from this London combo. The Maccabees make powerful indie-rock with incendiary guitars, the perfect backdrop to Orlando Weeks' poetic lyrics, which on this record are sometimes politically motivated too. It's very much an urban band, and the gentrification of the area around their studio (in the Elephant and Castle) is a particular bugbear. But ultimately we're here for the tunes, and just like on their last, Mercury Music nominated effort,  "Marks To Prove It " does not disappoint.