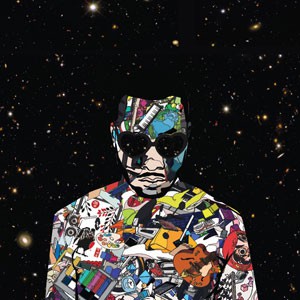 Seven Davis Jr releases his debut album 'Universes' via Ninja Tune – his most honest and heartfelt musical statement to date. Recorded in LA, San Francisco, Amsterdam and London, it’s a unique exploration of his musical landscape, traversing tempos and flipping styles with typical panache but always embedded in the bedrock of soul and funk.

Born in Houston, Texas, before relocating to Northern California, Seven Davis Jr was raised on the classics - from Michael Jackson and Prince to Stevie Wonder and Aretha Franklin. He studied gospel and jazz singing, inspired by the likes of Frank Sinatra, Nat King Cole and Burt Bacharach. During his teenage years he discovered dance music, specifically house and jungle.

SDJR’s early Bandcamp output was more closely aligned to Los Angeles’ vibrant left-leaning electronic underground. Nurtured by the Hit+Run crew, he owes his first official release to Kutmah (who bagged "Thanks" for his ‘Worldwide Family Vol.2’ compilation on Gilles Peterson’s Brownswood imprint in 2012). It was the only four-to-the-floor jam on an album curated by a DJ who is rarely drawn to that style and that fact alone is significant.

When he’s making straight ahead house music, the swing is reminiscent of classic Todd Edwards and the drums bump ‘n’ shuffle like Tuff Jam and Derrick Carter. And the vocals… well at times it’s like he’s channeling the spirit of George Clinton, offset with the sweet character of Peven Everett - the perfect balance of rough and smooth - it’s that undeniable funk that hooks in the hip-hop fans, the cats that don’t generally mess with “house” music. "Good Vibes" (feat. Julio Bashmore) nails this dynamic in a whirlwind 3 mins 18 secs that recalls Daft Punk at their boisterous best - proof that sometimes all you need is a chopped-up disco loop and a hook.

Elsewhere on "Universes" Seven brings a similar soulful energy that Moodymann or Theo Parrish purvey. "Sunday Morning" picks up where Seven’s "Wild Hearts" 12” left off, a mighty ditty with the cheeky mantra “I bet ya never had a love like this before?” sitting pretty upon bustling drums and bass punctuated with snatches of guitar. “It’s about having healthy confidence in yourself and what you can offer the world,” says Seven. There are more introspective moments on the record too – such as "Fighters" and "Afterlife" (feat. Kutmah) – that explore murkier downtempo depths.