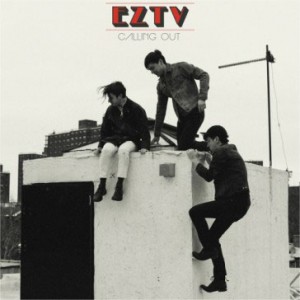 It wouldn’t be entirely accurate to say that EZTV met while trying out for J Spaceman’s latest US touring line-up of Spiritualized but it’s not far from the truth. Songwriter and audio engineer Ezra Tenenbaum had been casually working on solo home recordings on his Tascam 8-Track in the vein of Shoes, Emitt Rhodes and Cleaners For Venus and, in a desire to round out the songs, he enlisted bassist Shane O’Connell and drummer Michael Stasiak (formerly of Widowspeak). As it happened, the trio’s first chance to play together was an audition for the American touring version of Spiritualized (they didn’t get the job) but the trio kept meeting and working, turning Ezra recording as a solo artist into Ezra, Shane and Michael playing as a band; thus, EZTV was formed.

With a pool of over 30 demos to work with and Jarvis Taveniere of Woods onboard to produce, the band headed to Thump Studios in Greenpoint, Brooklyn, to record their debut al;bum for Captured Tracks. The result is ‘Calling Out’, a cohesive 12 song statement in the long tradition of fully realized debuts, stripped of artifice but full of hooks and songwriting chops.

Tracks like ‘The Light’ exhibit what you would call the EZTV mantra: presenting songs with only the required embellishments. They’ve got one foot firmly planted in classic American power pop and college rock while the other utilizes more left-of-the-dial sonic experimentation. The result is a sound that’s both familiar and new but always about the songs.

In an era of independent music with a lot more emphasis placed on story and meaningless Twitter feuds, EZTV present a record that speaks for itself. It’s an album made for an audience that doesn’t want or need any kind of angle or controversy but desires songs that resonate and have a lasting appeal, something available here in spades.

“[‘Calling Out’] was recorded with assistance from Jarvis Taveniere, member of perennial folk crew Woods, and one of the Brooklyn guitar-pop scene’s most reliable producer-engineers. Based on ‘Calling Out’s feel-good first single, ‘The Light’, it seems like it was a fruitful collaboration; despite being hinged on pretty sparse instrumentation - including a string of stoned, earworm-y guitar solos—the song sounds big and warm.” - The Fader