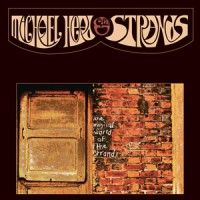 His second record as ‘Michael Head and the Red Elastic Band’ has just been released on his own label, Violette - ‘Velvets in the Dark’ 7 inch single. Shack’s 1990 single ‘I Know You Well’ opens ‘Perfect Motion’, Jon Savage’s 2LP compilation as “a musical return-trip to these fondly remembered years spanning 1988-93”.

Plus, Megaphone is set to reissue ‘The Magical World of The Strands’ in its original form, with the addition of a 20-page booklet, including new liner notes by Michael Head himself and photographs testifying to the album’s sleeve work-in-progress.

The CD version will come with 2 bonus tracks – the B-Sides to the 1998 NME and Melody Maker Single Of The Week ‘Somethin’ Like You’. ‘Green Velvet Jacket’ is an acoustic solo piece by Michael Head. And Queen Matilda (demo) was recorded in early 1993 and produced by the band’s friend and live engineer Ian Eastwood on a 4-track Tascam cassette recorder.

Alongside this reissue comes ‘The Olde World’, an exclusive new album of recordings from the same sessions.

Last but not least, Michael plans his first gigs as ‘Michael Head & The Strands’ promising to play his classic album ‘The Magical World of The Strands’ in full.

After a couple of demos for the French promoter who paired him with his childhood hero Love’s Arthur Lee in 1992, Pale Fountains and Shack legend Michael Head entered a Liverpool recording studio the following year, with a new project in mind, ‘The Strands’. Michael teamed up with his brother and lifelong companion, John, his long-time drummer Iain Templeton and two new recruits, Michelle Brown on bass and Les Roberts on flute. The recording sessions would last two years and were only halted because Michael was offered a new major label deal. A deal, not for his current work, but for him to record as Shack again.

So it came to be that Stephane Bismuth, the French promoter, was left with 100 or so minutes of a thwarted project, only a third of which had made it to the mixing studio in Sheffield in the summer of ‘95.

Patch-working and weaving rough mixes and sketches – by engineer Steve Powell, made in Liverpool – with completed mixes by producer Mark Coyle who had hired an arranger and string section for sessions in Sheffield, Stephane Bismuth founded a new label Megaphone and finally released ‘The Magical World of The Strands’, in autumn of 1997.

This work-in-progress comprising sketches, rough mixes and fully orchestrated tracks, garnered great critical acclaim and is still rated by many as the "rarest jewel of the 90s", Q Magazine.

About “The magical world of the strands” :