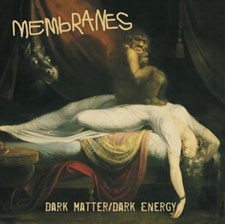 Fronted by charismatic singer John Robb, the Membranes formed in the wake of Punk in Blackpool in 1977. Membranes made a huge impact on the post-punk scene of the 1980s, with John Robb also establishing himself as a music journalist of note. John Peel was a huge supporter and bands as disparate as Mercury Rev, My Bloody Valentine and Big Black have cited them as an influence. After Membranes folded, John returned to the stage with Sensurround and most notably Goldblade, before rekindling Membranes a few years ago. Dark Matter/Dark Energy is the first Membranes album since 1989. It’s awash with their off-kilter mix of angular post-punk adventure, Krautrock-ish soundscapes and edginess. The album is inspired by a conversation with Joe Incandela, the head of the CERN project about the Higgs Boson particle (Joe is on one of the tracks). It’s all about the life and death of the universe; during recording, John Robb's father died and the album is also about him.

Dinosaur JrGive A Glimpse Of What Yer Not