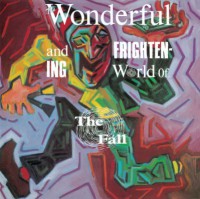 Released in 1984, The Wonderful And Frightening World Of The Fall was the band’s seventh studio album and their first for Beggars Banquet. It makes few conces¬sions to the larger market - every potential hook seemed spiked with the band’s usual rough take- it-or- leave- it stance - though the integration of Brix Smith into the band added a melodic twist.

This LP has been mastered from HD files transferred from the analog tapes.

David says: This is the pinnacle of The Fall’s ‘golden period’, bookended by ‘Perverted By Language’ and ‘The Frenz Experiment’. When I first arrived in Manchester I saw them six times in six months, on each occasion they were 100% more shambolic than the previous gig, which is impressive even by their standards.