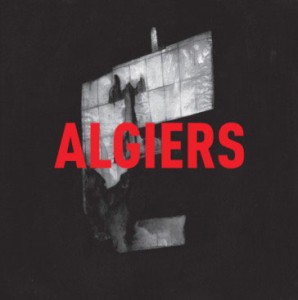 From the militant stomp of ‘Remains’ to Fisher’s commanding presence on the gospel no wave blowout ‘Black Eunuch’, Algiers channels righteous fury into an incisive, innovative assault that Vice Noisey calls “intense… right on the beat of the current cultural climate.”

A trio of émigrés of the American Deep South, now split between New York and London, Algiers synthesize their eclectic influences, from Nina Simone and PJ Harvey to Suicide and Public Enemy, into frightening new forms.

“Gospel spook… a double-edged sword of religion and politics to slice through the pasty, vapid mess of pop culture in America.” - Stereogum

“While Nick Cave channeled Old Testament fury in order to explore evil with uncomfortable intimacy, Algiers employ it politically, in an effort to name the sound of dispossession.” - Ad Hoc

“Mesmerizing… really sucks you in with its weird power.” - The Wire

“Dark stuff, but good grief they’ve got soul.” - The Guardian

“Sounds like the end of the world.” - Line Of Best Fit