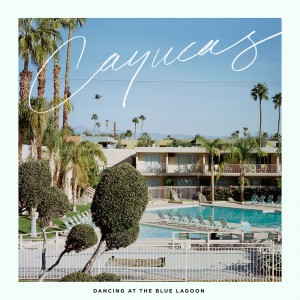 As Zach Yudin and his twin brother and bandmate, Ben, went in to create their new album, what it all came back to was something personal. While they now call Los Angeles home, they drew from the nostalgia of their childhood growing up in Davis, CA; the nostalgia in their music that is as much about a place they’ve never been as any actual experience. And it was that wandering imagination and a punchy California dream that eventually grew to become Dancing at the Blue Lagoon.

While their sun-drenched, jangly, sometimes melancholic sound is quintessentially Californian, the album very much their California. It’s the sound of kids from the suburbs who fantasize in Technicolor, whose view of the Golden State is its own form of idealism.

Dancing at the Blue Lagoon is all about a band testing its comfort zone and asking us to do the same. Zach and Ben would “create bands that were more like a musical idea,” record a few songs, and then move on. Cayucas grew out of this period of experimentation. Cayucas has taken sound we thought we knew and turned in into something personal and complex.