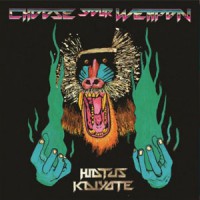 Wrapped in soul, blending poetry and polyrhythms, the music of Hiatus Kaiyote is in a lane all by itself. The Grammy-nominated four-piece band returns to stereos with their new album "Choose Your Weapon" via Flying Buddha / Sony Music Masterworks. The 18-track, 70-minute odyssey from the Melbourne, Australia-based band takes listeners on a journey through the group's self-created ecosystem, populated with songs each embodying its own mini-cinematic sonic soundscape. The album is the hotly anticipated follow-up to their celebrated 2013 debut album "Tawk Tomahawk". Fans have already gotten a taste of what's to come on Choose Your Weapon by way of their December 2014 EP, By Fire, which featured three of the album's 18 tracks. ""By Fire" is a burial song," says frontwoman Nai Palm, about the personal track. "It discusses the creative and destructive forces of fire and uses this element as a reference point to express about my father passing away in a house fire."

Side A
1. Choose Your Weapon
2. Shaolin Monk Motherfunk
3. Laputa
4. Creations Part One
5. Borderline With My Atoms
Side B
1. Breathing Underwater
2. Cicada
3. Swamp Thing
4. Fingerprints
5. Jekyll
Side C
1. Prince Minikid
2. Atari
3. By Fire
4. Creations Part Two
Side D
1. The Lung
2. Only Time All The Time: Making Friends With Studio Owl
3. Molasses
4. Building A Ladder

EditorsThe Weight Of Your Love