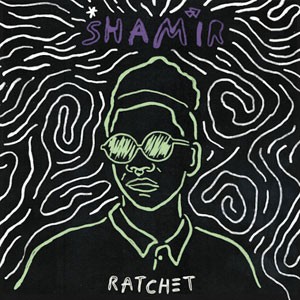 Following a BBC Sound Of 2015 nomination and signing to XL Recordings, the hotly-tipped talent Shamir comes correct with his debut album "Ratchet". The Las Vegas-based singer crept slowly into the awarenesses of music fans with a steady rise in popularity following the release of debut EP "Northtown", which was put out on the Godmode Records label. Hypnotic single "On The Regular" marked the transition to the indie label giant XL and promised an album of addictive rhythms and bold pop magic.

Dismissing any questions of over hype straight off the bat, Shamir opens the LP with the Sylvester "I Need Somebody To Love Tonight" stylings of "Vegas", delivering the best low tempo cut of the year so far. From that point forward there's no looking back as the young gun unites Larry Levan-era house, DFA-style beats and strikingly sincere and lyrics into a ménage à trois which calls to mind the finest work of Hot Chip, Holy Ghost! and Tiga. Alongside the pure pop majesty of "Make A Scene" and "On The Regular", there's the thumping house hit of "Call It Off" and "Hot Mess" before the smooth R&B stylings of "Demon" closes the A-side. As we dive to the flip, LP standout "In For The Kill" goes woozy and wonky in an explosion of brass backed 'Arthur Russel goes house' genius. "Youth" channels Hot Chip at their dancefloor best (think of "My Piano") before "Darker" heads off on an emotive FKA Twigs-esque crank anthem. And how better to finish this glorious artistic statement off than with a high camp, high energy house slammer, which is exactly what "Head In The Clouds" is.

"Ratchet" sees Shamir live up to the hype and reset the bar for danceable pop music - get involved.