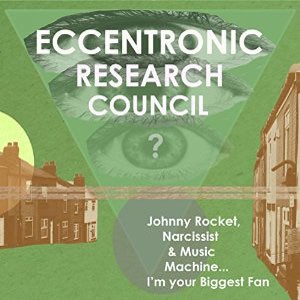 The album sees The Eccentronic Research Council team up with Lias Saoudi and Saul Adamczewski of South London’s The Fat White Family, who ably play the role of The Moonlandingz.

Barry says: It sounds a bit Radio 4, but this album is a story.. It is a rousing tale (no spoilers) of a woman and her struggles with her passion for music, and her love of a band. Through this we get to hear some back-story, and reasons behind her eccentricities. Sounds weird, right? Now add to that the fact that said woman is inspiringly voiced by Maxine Peake, and the fictional (but now real) band is two members of the Fat White Family, and you have an altogether more promising concept. It delivers wholeheartedly. Fantastically northern voice narrates her life atop a brilliantly written and performed (not to mention historically accurate) fuzzy indie backdrop. When listening as a whole, this is the full package, rousing, moving, rawkous and witty. Truly an experience.

Johnny Rocket, Narcissist & Music Machine… I’m Your Biggest Fan
Welcome To Valhalla Dale
The John That Fell To Earth
I Am Mearley A Flute Lament In The Mind Of A Nuisance
Introducing The Moonlandingz (The Audience On Trial)
The Cooper Effect
Ingratiate & Creep & Other Ignorable EMithers
Sweet Saturn Mine
Internet Spreads Whilst Wiki Leaks / Real Nite Clubbing
Johnny’s Spirit Guide Did Not Send For You
I Am Your Only Fan / Psyche Ersatz
Off The Cloth Moth - SWAT
Mental Illness In Art, As Explained By An
Amateur Psychologist, Sponsored By Google
Claptrap Dreams
You Ruined My Chippy Thursday (Should Of Gone To Codrophenia)
Time Out (Excellent News)
If You Want To Worship - Go To A Church
I Spy On J Rocket & Other Lame
Attempts At Leaving Him Alone
Excuses, Tall Tales Or Both? (You Decide)
Man In Me Lyfe / She Won’t Settle Down (Nightmare Version)
The Ignorance Of Johnny Rocket & The Day The Witch Died
The Bus From Hell - One Bird - One Stone
Lay Your Head Down On The Road (JR’s Ghost At Riverside Mix)