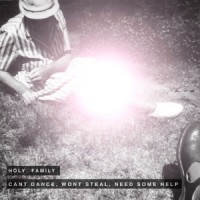 As anyone who’s ever stayed in one place far too long will know, sometimes a drastic change is what’s needed. For Holy Family, the duo of non-blood brothers Anton Ekman and Viktor Hansson, a radical relocation from Sweden to Canada has helped shape the sound of their transatlantic debut album Can’t Dance, Wont Steal, Need Some Help.

“The last months before moving to Montreal, living in Gothenburg had become increasingly unbearable,” recalls Ekman. “To us, Gothenburg was the city that we'd initially adopted as our home and it's accepting us was a big deal. But inevitably we started dragging our feet behind us and needed a change of pace.”

Country kids at heart, Montreal’s lush scenery provided respite from the daily rigmarole of their home city with Canada’s open spaces having a far bigger influence on the pair than they expected. The expedition wasn’t a case of simply ‘finding’ themselves, this was a band who had already met, gotten to know each other, performed at Toronto Film Festival, received an award from the Swedish Association of Composers (STIM), and broken up with themselves; originally a trio until their third member left town, if anyone could be certain of their identity, it’s Holy Family. “As a trio we struggled to make long-distance work but after a while we had to accept that sending files back and forth between each other wasn't for us,” admits Hansson. “Our sole goal was to make enough tracks to fund inter-rail tickets for an Eastern European tour. Somewhere down the line we stopped dreaming of Eastern Europe but continued making tracks.”

Ironically, going the distance was precisely what the pair needed, and under their new guise as a duo they set course for Montreal having felt a kinship with Canadian exports Wolf Parade and Godspeed You! Black Emperor whilst needing to venture far enough away so that backing out wasn’t an option. Whilst strolling around downtown on one of their first days in the city, the pair passed a homeless man with sign that said "Can't dance, won't steal, need some help". “It stuck with us. Possibly because it did feel like we needed a whole lot of help being in a new town without any real safety nets,” they remember.

Superbly demonstrating Holy Family’s uniquely ambivalent sense of place, five of Can’t Dance’s tracks were completed in Montreal with the other five completed back in Gothenburg. The sound of two worlds colliding, it’s a culmination of where the duo is headed and where they’ve already been. Written whilst sharing the one-bedroom Montreal apartment where the band currently resides, ‘East Coast Nerves’ resurfaces the mechanical rhythms heard by Viktor in a previous life as a Gothenburg dock-worker, whilst home-grown track ‘Youth Cult’s stripped back mood looks towards the pair’s future in their new location. The fuzz ripping through the doom laden garage sound of Gothenburg track ‘Keeping Up’ recalls the city’s unquenchable thirst for romanticising the industrial working class days and it’s brilliantly offset against the uplifting atmospherics of Montreal track ‘Trail Of Songs’.

“To be able to have the perspectives of both being inside looking out and outside looking in was important,” they say. “The first couple of months after moving to Montreal we hadn’t really started working so inevitably a lot of time was spent reflecting on how our lives had been previously and trying to figure out how we wanted them to be.”

Whether finding a way to mix things up a little or simply as a means of escape Can’t Dance is an album fuelled by hope. From questioning the status quo and social roles of a previous life to focusing upon wants and needs mostly born out of personal frustrations for now, Holy Family’s distinct approach comes from appreciation rather than disdain; from hoping that life will prove itself somewhat moldable, wherever they find themselves.