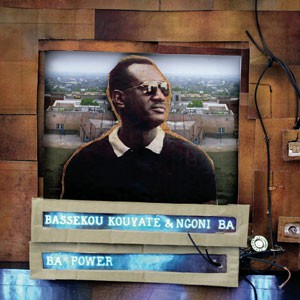 Bassekou Kouyate & Ngoni Ba's fourth album 'Ba Power' (and his first for Glitterbeat Records) is a striking, career defining record marked by mesmerizing songs, razor-sharp riffs and full-throttle emotions. Following two years of worldwide touring for the much heralded Jama Ko album, Bassekou's band, Ngoni Ba, has turned up the volume and dynamics significantly and Bassekou's masterful ngoni playing has achieved a new level of intensity that can only be called: afro-rock. Distortion and wah wah and propulsive rhythms are now the defining backbone of his songs and the heat lightning vocals of his wife Amy Sacko, more than ever serve as the passionate and perfect foil. This is not the same Ngoni Ba. This is indeed: 'Ba Power'.

Without question Bassekou Kouyate & Ngoni Ba has revolutionized the sound and narrative possibilities of the ngoni, the lute-like instrument that is essential to Mali's Griot culture. Griots are esteemed musician / storytellers whose lineage stretches back centuries. Bassekou was born into this resonant tradition but his relationship to it has been anything but static. From the beginning of his career, through his invention of a previously unheard repertoire built around the melodies and rhythms of four interlocking (and at times electric) ngonis, Bassekou has demonstrated his respect for the past by radically pulling it into the future.

The new album 'Ba Power' is arguably the most inspired and fearless step in this process. It is clearly Bassekou's most outward looking album, an album where he sharpens his view beyond the eclectic sounds of his Malian homeland and directly engages on his own terms with elements of rock & roll ("Siran Fen"), blues ("Bassekouni"), jazz ("Aye Sira Bla") and other West African musics like afro-beat (check out the riff on "Waati").