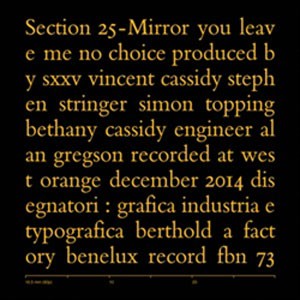 THIS IS A RECORD STORE DAY 2015 EXCLUSIVE, LIMITED TO ONE PER PERSON.

Factory Benelux presents Mirror b/w You Leave Me No Choice, the brand new single by Section 25 issued in a special limited edition of just 500 copies to mark Record Store Day on Saturday 18 April 2015
Coinciding with a deluxe double disc remaster of classic debut album Always Now (originally released by Factory Records in 1981), the single features brand new recordings of two songs performed live by the original trio line-up of Section 25 in 1980/81, but never studio recorded. Bridging past and present, Larry Cassidy’s vocals and lyrics are now handled by Factory colleague Simon Topping, previously a member of A Certain Ratio, Quando Quango and T-Coy.
The artwork is based on the original cover design for Always Now by Peter Saville, with the colour scheme now reversed.
Section 25 are Vin Cassidy, Beth Cassidy, Steve Stringer, Jo Cassidy and Simon Topping. “A revelation. The best old/new band in Britain” (The Guardian, 2014).

Side A: Mirror
Side B: You Leave Me No Choice