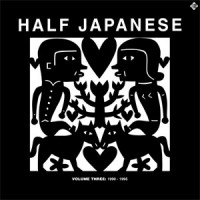 Formed in the mid-70s, and setting the standard for post-punk ever since, Jad and David Fair and Half Japanese return with a new volume that finds us twenty years into their story. The 90s would see them under a new spotlight as Kurt Cobain used his celebrity to tell anyone that would listen about their greatness, and had the band tour with Nirvana. They would respond with three of the most wild and varied albums in their career.

Continuing their Fire deluxe reissues of the entire Half Japanese catalogue, Volume Three: 1990-1995 is the third of four volumes containing three LPs/CDs. This next set of Half Japanese LPs begins with 1990’s explosively, noisy and chaotic (sometimes improvised) ‘We Are They Who Ache With Amorous Love’ featuring their cover of the Them garage rock classic “Gloria” and two tracks “Titanic" and "Hand Without a Body” that were co-written with the like-minded Daniel Johnston. Two years later the notably more delicate and, dare we say, jangly, ‘Fire In The Sky’ (1992) arrived at a pivotal time for the group when they gained notable recognition from the likes of Sonic Youth, Nirvana, Teenage Fanclub and Yo La Tengo (whose Ira Kaplan guests on the record).

This highly anticipated third installation closes the trio with 1995’s ‘Hot’ which became MTVs album of the week on release, with Michael Goldbery writing “Hot, mixes Sonic Youth-style noise, Stooges primitivism and ’60s pop with excellent results. “Lucky Ones” is a simply charming number (“A good thing just got better/ As better as better can be”) reminiscent of Jonathan Richman, while “Drum Straight” is dose of feedback drenched skonk and “Vampire” rocks hard liken the Sonic’s “Bull In The Heather.” Fire’s colossal Half Japanese series began last year with the Record Store Day exclusive of ‘Half Gentleman/Not Beasts’, this set contains the records in their original form with extras that later appeared on CD formats available. It will also include original artwork from Jad Fair and liner notes by Half Japanese hall of famer Mark David Jickling. “Cutting straight to the gut. Jad’s phrasing matches surging sentiments, creating a counterpoint to the spot-on music. When they grind out a groove half-rhythmic/half-blank cadences, the woozy disconnect is oddly compelling” Pitchfork’s Best New Reissue (Volume 2: 1987-1989)

“An impressive and well-assembled study of one of this band's more interesting periods” - All Music.

“This should also lay to rest any questions about the importance of Half Japanese. Without them, we wouldn’t have the primitive pop of Beat Happening nor the id-bearing beauty of Daniel Johnston” - Paste Magazine.