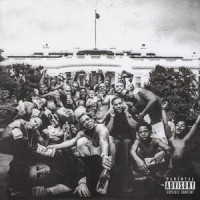 Rush-released due to Internet leakage, Kendrick Lamar's 'To Pimp A Butterfly arrives in double quick time.

With Lamar's previous album, 'Good Kid M.A.A.d City', lauded as one of this fledgling Century's best, the level of expectation on its follow up was sky-high. How do you proceed after such a triple A-rated straight-up hip hop smash? Get afflicted by the (P)funk, that's how. Channelling the psychedelic stew of Parliament / Funkadelic, 'To Pimp A Butterfly' positions Lamar along the higher branches of rap's genre-busting evolution (see also The Roots’ 'Phrenology', Common’s 'Electric Circus', Q-Tip’s 'Kamaal the Abstract', André 3000’s 'The Love Below'). The expansive scope of Lamar's vision also runs to a live studio band featuring Robert Glasper, Flying Lotus' fretless bass maestro Thundercat and producer /sax player Terrace Martin, who add free jazz backing, pulling the music in another direction.

Lyrically the album walks in the footsteps of the socio-political commentary of Curtis Mayfield and Marvin Gaye, but in the post-Ferguson era of continued police brutality towards African-Americans, Lamar's anger burns bright. Less 'What's Going On', more ' The Predator'. He offers a thoughtful and thought-provoking exploration of what it means to be a black man in America today, often introspective, but never naval-gazing.

Inspired and inspiring, 'To Pimp A Butterfly' is an adventurous and challenging album, and one that can be added to the essential hip hop list.