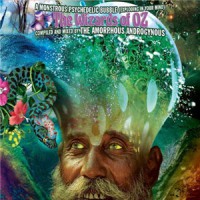 ‘The Wizards Of Oz’ is devoted exclusively to the rich heritage of cosmic space music of our Antipodean brothers and sisters and in common with previous volumes traces the lineage from the sixties to the present day with sonic delights from every decade in between.

Once again the Amorphous Androgynous show themselves dab hands at unearthing the absurd, the obscure and the downright wonder filled from over four decades. The tracks are expertly woven and mashed together to form a trip as enjoyable as it is both enlightening and educational. As has always been their want they reappraise what the 'psychedelic' might mean in the present day adopting the role of the DJ in the process rather than as band or producers / remixers as has been known, showing that a new 'psychedelia' exists as much in the surprising juxtaposition of style and variety of song as it does in the individual songs themselves.

Unlike previous volumes 'The Wizards Of Oz' majorly features music and bands that the Amorphous Androgynous had never previously heard (though some like Tame Impala rose meteorically within the album's two year inception) and as the collection evolved the question that arose with increasing regularity was 'How and why have we not heard this before?!" and then 'if this band had been from the UK or the USA would they have been unheard and unknown?" The answer to this was a resounding no so an almost political fervor was born to bring the treasure of ‘The Wizards Of Oz' forth so that ‘A Monstrous Psychedelic Bubble’ could continue its ongoing legacy to reinvigorate the psychedelic potential of both now and future generations by bringing and tracing the timeless psychedelic music through the years together in order to activate future revolutions of cosmic space music.