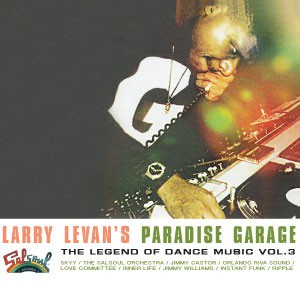 Following on from the previous two volumes of high quality disco heat dug from Salsoul's legendary back catalogue, we're treated to the third instalment of bona fide 'Larry List' classics which were favoured by the DJ on the dancefloor of his seminal, game changing NYC nightclub The Paradise Garage. High quality disco, boogie, funk and more is the order of the day here with prime-time hits flawlessly rubbing shoulders with underground cuts in a way that mirrors Levan's open mind and faultless ear for music. His elusive early 80s remix of Jimmy Castor's perennial B-boy / B-girl jam "It's Just Begun" sits comfortably alongside essential tracks like Skyy's club classic "Here's To You", Inner Life's anthemic "Moment Of My Life", Ripple's addictive "The Beat Goes On And On" and Orlando Riva Sounds trippy "Moonboots" among many others. This is an essential release for those who dig the disco sound and want to have all these incredible records in one place, or for newcomers who wish to explore the sounds and vibe of one of the greatest DJs of modern times and who want to get down to some of the tracks that have shaped modern day club culture. Remastered, repressed and re-released for 2015 in full conjunction with Salsoul Records New York City.

Matt says: First time back in stock since 2015 (!!). One of those catch-all compilations (on triple vinyl no less) that every disco lover (or music lover in general TBH) needs. Inflation proof - it's the same price it was in 2015!

1 Jimmy Castor It's Just Begun
2 Love Committee - Just As Long As I Got You
3 Skyy - Here's To You
4 The Salsoul Orchestra - Salsoul Rainbow
5 The Salsoul Orchestra - Magic Bird Of Fire
6 Inner Life Feat. Jocelyn Brown - Moment Of My Life
7 Jimmy Williams - All Of My Lovin'
8 Instant Funk - Slap Slap Lickedy Lap
9 Skyy - Skyyzoo
10 O.R.S. (Orlando Riva Sound) - Moonboots
11 Ripple -The Beat Goes On And On