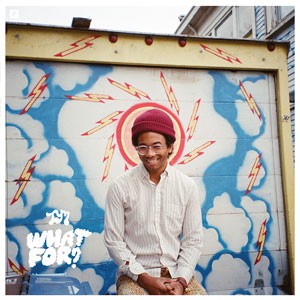 Never one to stand still and fresh from a scheduled intermission whilst working on a dance record as Les Sins, loaning his vocals to Chromeo and starting his own record label, producer, songwriter, singer and melodic mastermind Chaz Bundick is all set to resume his Toro Y Moi guise with brand new album What For? And whilst most would think there were no genres left to play with, the intrepid musical explorer is about to throw one hell of a curve ball into the mix.

“I’ve done electronic R&B and more traditional recorded R&B stuff. I just wanted to see what else was out there,”Bundick says of the record’s new direction. “It’s all coming from the same mindset and point of creativity. It’s just me trying to take what I already have, then taking it further asking, "OK, what can I do now?" or "What haven't I tried yet?"

As mastermind and ringleader of the smeared electronic production sound that defined and established ‘chillwave’ before hipsters rode it within an inch of its life (see 2010’s Causers of This), an explorer of motorik space-age funk (2011’s Underneath The Pine), smoky 4/4 house-tinged pop, electro-funk and late-night electronic soul (2013’s Anything In Return) all to critical acclaim, What For? is where Toro Y Moi’s story continues - albeit one that leaves its true meaning only to imagination. “The album’s main themes are love and nature,” he hints. “I wrote about personal experiences but intentionally left them vague. I‘ve always felt that good songs should heighten your mental awareness.”

Written and recorded over the course of eight months at his home studio in Berkeley, California,What For?draws inspiration from Big Star, Talking Heads and Todd Rundgren, as well as the psychedelic soul of Brazil’s Tim Maia and ‘70s-era jazz-funk of France’s Cortex. Unknown Mortal Orchestra guitarist Ruban Neilson appears on the album, as does multi-instrumentalist Julian Lynch. This time, meticulous production of stereo-panned guitars, buzzing synthesizers, funky keys and live drumming has paved the way for the feel of a rock band playing together in the same room; “A studio should keep changing and all of the gear should be out and exposed or else you'll never remember to use it. With this album, I'd just walk up to an instrument somewhere in my house and start writing,”Bundick recalls.

Having spent his formative years playing in punk rock bands and studying graphic design at the University of South Carolina, Bundick began making bedroom recordings under the name Toro Y Moi in 2001. Those early demos made up the seeds of his distinct retro-future sound ahead of a brief stint in New York before relocating to California in 2012. It’s a move that has given Bundick time to reflect on what’s important, allowing him the freedom to create whilst also embarking upon new exciting projects such as establishing ‘Company’ records;
“Having a label has been a goal for a while. I want to be a part of this generation,”tells Bundick. “I'm aiming to take Company as far as it can go. I'm helping artists with each release from production to the design of the album cover to make something timeless.”

Whether recording and creating another album, or assisting with someone else’s work in progress, Bundick continues to prove to be as prolific as he is diverse. In the process he is constantly pushing the limits to point Toro Y Moi in new directions, yet never sacrificing his melodic sensibility or keen ear for arrangements and texture.