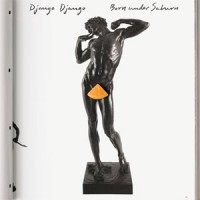 Django Django release their sophomore album via Because Music. 'Born Under Saturn' is the work of a band fired up by confidence and experience and propelled way beyond their DIY roots. It has all of the imagination of their debut self-titled album but splashed across a larger canvas.

“Once we got into the studio it became obvious it would be a bigger-sounding record,” says bassist Jim Dixon. “When we were writing the lyrics there were lots of references to rebirth, turning a new page and starting something again,” says Dave Maclean. “I guess that’s something we all felt.” Like before, Django Django are blessedly oblivious to genre rules. “A lot of it has to do with growing up being more into mixtapes than albums,” Dave says. “I think that sensibility comes through. Since I was a kid I’ve always tried to see the connections and threads through music.”

Recorded at Netil House in east London and Angelic Studios in Banbury, 'Born Under Saturn' saw the song writing split four ways with Dave also producing the record. Lyrics often emerged naturally from the sound of the music. There are dark dramas like Found You, which draws on the myth of Faust’s deal with the devil, and Shot Down, a bloody tale of crime and betrayal. Jim wrote the sighingly beautiful 'Beginning To Fade' while contemplating writer’s block and the atmospheric, synth-driven 'High Moon', says Dave, is about people who “come alive at night”. 'Born Under Saturn' expands on the slippery, indefinable brilliance of the debut, finding magic in the unexplored spaces between different kinds of music, and never doing the same thing twice.

Django DjangoGlowing In The Dark