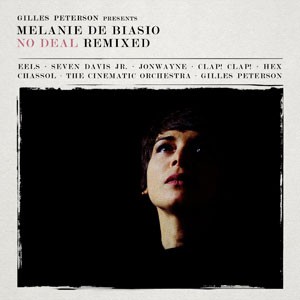 A huge fan of the Belgian singer, Peterson has curated a new remix version of her acclaimed album ‘No Deal’. He called upon some of the most exciting names across the jazz, electronic and indie worlds for ‘No Deal Remixed’, including EELS, The Cinematic Orchestra, Hex and Seven Davis Jr.

Says Peterson; “To my mind, of all the new artists around, the most remix friendly has to be Melanie De Biasio. For a person like me with a DJ mind, the minimalism of ‘No Deal’ makes it perfect. I’ve been dropping ‘I Feel You’ on top of beats anyway and even played ‘I’m Gonna Leave You’ in its original form when the moment arose - it’s such a pure track. In fact the first thing I did on meeting Melanie for the first time this year was to ask her who produced the album. It was me she replied... so not just a pretty voice!”