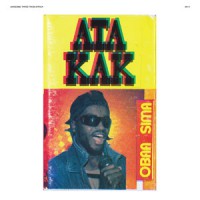 Ata Kak's cassette 'Obaa Sima' fell on deaf ears when it was self-released in Ghana and Canada in 1994. The music on the recording - an amalgam of highlife, Twi-language rap, electro-funk and disco - is presented with the passion of a Prince record and the DIY-bedroom-recording lo-fi charm of early Chicago house music. The astute self-taught song craft and visionary blend of sounds and rhythms has made the album a left-field cult favorite among adventurous listeners worldwide. Awesome Tapes From Africa founder Brian Shimkovitz found the tape in 2002 in Cape Coast, Ghana - one of only a few ever pressed - and later made it the inaugural post on the Awesome Tapes From Africa blog. Hundreds of thousands of downloads, YouTube views, music video tributes and remixes, as well as years of mystery regarding Ata Kak's whereabouts, culminate in this remastered release featuring rare photos and the full back story of one of the internet age's most enigmatic musicians.