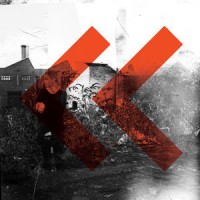 ‘Hinterland’ (literally “the country behind” in German) conjures impressions of decayed Manchester outskirts and reclusive inner landscapes obsessively throughout the record, as Lonelady's Julie Campbell continues her fascination with the post-industrial ruinscape.

As with her 2010 debut 'Nerve Up', on 'Hinterland' Campbell continues to pay homage to the post-punk era. I can hear many influences in her punk-funk style - A Certain Ratio in occasional basslines, Viv Albertine (the Slits), Nile Rodgers (Chic) and Andy Gill's (Gang Of Four) guitar sound (skeletal, harsh, chiming) , dark and brooding drones, cello and synths (Joy Division, Nico etc), but Lonelady transcends all these reference points to come up with her own sounds. Crucial to her elevation above mere pastiche is Campbell's agile, urgent vocals and her ability to come up with pop hooks that weave their way through the tracks, from the edgy, fidgeting 'Bunkerpop', via breakout disco-not-disco single 'Groove It Out' to the low-slung sleaze-funk of title track 'Hinterland'.

In Campbell’s words: “It’s channelling Parliament / Funkadelic, Stevie Wonder, Rufus, Prince, Arthur Russell… among others. A strange - but nonetheless real - meeting of funk and… me from Audenshaw, Manchester.”

Andy says: That rare thing: an album that unites everyone at Piccadilly! Superb stuff.