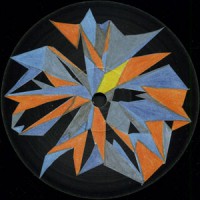 The unstoppable Sam Shepherd returns to his Eglo imprint with another game changing dancefloor odyssey which stands head and shoulders above his competition. "Nuits Sonores" was originally bounced down live during Floating Points' performance at the festival of the same name, at the precise moment Sam and the army of dancers transcended this plane of being and entered a new era of consciousness. Shepherd tops a trademark syncopated rhythm with fragile sine waves and chattering sequences, which he builds up into a crystalline tower of interlocking synthesis at the four minute mark, before ripping it apart to leave a classic jazzy FP groove. Another outstanding compostition which has promped the following comments on youtube; "This when Four Tet played it at fabric last month almost made me die of bliss overload.", "Hashtag AstraL travel amirite" and "Floaty P reaching demi-god status". On the flip, our favourite classically trained future jazz genius drops another space age hit of hybrid deep house, set to an 11/4 swing naturally! Pinging synths and Rahel’s sweet vocals float around a bruk rhythm while a subby bassline keeps the track grounded. Lest you think Sam’s gone soft on us, he delivers some gritty rave stabs and menacing synth tones as he hits us with a couple of heavy duty drops. Unreal!

A. Nuits Sonores
B. Nectarines