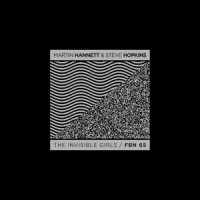 Martin ‘Zero’ Hannett is the legendary Manchester producer famous for his work with Joy Division, Buzzcocks, New Order, Magazine and Happy Mondays. Steve Hopkins was his musical partner in The Invisible Girls, the floating studio collective that shaped epochal records by John Cooper Clarke, Pauline Murray, Nico and several others.

The first five tracks on the album are a selection of previously unreleased ‘Moods’ recorded at the famous Strawberry Studios between 1980 and 1987. “These were the beginnings of Martin’s Invisible Girls world domination plan,” Hopkins explains. “The idea was to assemble a roster of key instrumental players, produce tracks to be fronted by different singers/stars - and get some hits!”

Other tracks include rare solo tracks by Hannett, collaborations with Section 25, Pauline Murray, Nico and Crispy Ambulance, as well as the complete soundtrack to All Sorts of Heroes, a short animated film from 1976 scored by Hannett and Hopkins.

The 74 minute album features detailed liner notes by Steve Hopkins and others, as well as archive TIG and Strawberry images.