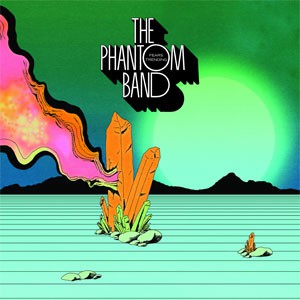 If you’ve followed The Phantom Band throughout their career to-date then you’ll know two things of the Glaswegian six-piece: feast often follows famine, and you should never accept them merely at face value. Just as two wildly singular, diverse albums in Checkmate Savage and The Wants sprung up one after another between 2009 and 2010, before a period of quiet (solo projects notwithstanding), so the group’s more direct third record released in June 2014 - Strange Friend – more art-rock than rock-art – comes followed by seven tracks cut largely from the same recording sessions at Chem 19 in Blantyre, in the form of Fears Trending.

Lauded last spring pretty much across the board, Strange Friend’s instant hit to the senses was the sound of a band pulling a thread tight through their naturally wandering creative tendencies and affecting a sense of positivity, even amidst quiet doubts over living in a world simultaneously hyper-connected and disconnected through the internet. For those who saw through the likes of ‘Clapshot’s’ irrepressible anti-anthem swell, though, Fears Trending is a resounding confirmation that the band’s recent recording sessions also bore out something of a darker hue.

“Maybe it's the evil twin of Strange Friend,” comments guitarist Duncan Marquiss. “They're stranger friends, oddball vestiges and hybrids.” Chief vocalist Rick Anthony agrees, pointing out that although Fears Trending merely came about as an anagram of their third record’s title, its connotations ring true, with a greater focus on themes of online isolation that they pawed at previously. “The reference is obviously there,” Marquiss explains. “Maybe it reflects our wariness of communications technology just now – which paradoxically seem to alienate people from themselves. We're all swamped with information so I question whether the band would necessarily want to add to the clickstream.”

Certainly the tone of the record matches this apprehension; the opening ‘Tender Castle’ – one of just two tracks, alongside ‘Spectrelegs’, that date back before the Strange Friend sessions – runs on in, imbued with the band’s recently heard gusto, yet quickly swivels on a tumbling floor of murmuring electronics and cautious intonations, setting the scene for some of the band’s weightiest music yet. There are familiar tropes here; the aforementioned ‘Spectrelegs’ introduces itself by way of a wavering electronic organ, Iain Stewart’s drumming is never less than forthright and punchy, stomping through ‘Local Zero’ with accustomed vigour. But then there are songs like the ominous slow-build tumult of ‘Black Tape’, and the poignant final track ‘Golden Olden’, which sees the band in some-part return to the Scottish folk routes that partly informed their first record (cult Scottish folk favourite Alasdair Roberts also appears on opening track ‘Tender Castles’.) “If Thomas Pynchon was asked to write the screenplay for Young Guns 3 I hope this song would be the soundtrack,” Marquiss reflects.

‘Denise Hopper’ differs again, taking on a melodic structure whipped up as though on an Estesian gust across Turkey, Anthony’s vocal rising and falling in its oscillating breeze. Delivered with steeliness beyond the usual dry wit that’s occasionally hinted at within the group’s usual off-kilter meanderings, the track cracks and breaks amidst a storm of guitar detritus. “That melt down at end could be one of my favourite Phantom Band moments on record to date,” Marquiss comments.

It’d be too broad to call Fears Trending the dark side to Strange Friends’ light. The playful intricacies and deviations of The Phantom Band remain and, after all, the album was recorded at the same time as its sister. “I think it's more about the atmosphere than the writing process that splits the two albums” Anthony reflects. “I guess there was a desire with Strange Friends to come back with no baggage attached and release a record that seemed really straight to the point. This record is straight to the point too but it's just that it's making a different point.” So it goes with The Phantom Band, a group forever changing, each new evolution more often than not a prescient for what’s to come.