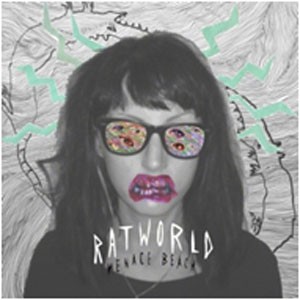 Back in the good old of days of 1990, Color Dream Games released Menace Beach for the then popular NES games console from Nintendo. Imagine skateboarding through a side-scrolling 8-bit world filled with balloons, clowns and disgruntled dockworkers in search of your cute pixilated girlfriend Bunny. It’s from this slightly surreal, esoteric world that this Leeds indie rock revolving cast of local luminaries, headed by Ryan Needham and Liza Violet, draw their name. It’s reference acts as the perfect backdrop to their 90’s American underground and pre-Brit Pop indie; melody heavy, supercharged pop that’s always surprising.

After the success of their EP ‘Lowtalker’ in early 2014, British indie label favourites Memphis Industries snapped Menace Beach up with the band’s debut album in mind. It comes in the shape of ‘Ratworld’, a twelve song assault, a journey through a psyche tinged wonderland, documenting moving away and waving goodbye to the fractured rubble of an unhappy lifestyle. On the title, Ryan says “We’ve created our own grubby little Ratworld to inhabit. Everything is better when it’s a bit grubby and broken”. It’s that dreamy sensation of taking comfort in chaos, looking around at the perfect mess you’ve created and feeling deeply content as it’s yours and no one else’s.

“Among this year's most anticipated British releases” NME
“Like the Shins back when they still had the spark of youth, but with Superchunk’s playful sass and unrestrained crunch” Stereogum