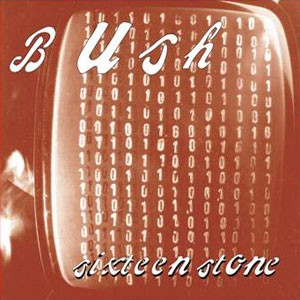 Sixteen Stone is the debut album of British rock band Bush, released in 1994. Widely regarded as the band’s most popular album, it peaked at No. 4 on the Billboard 200 and boasted numerous successful singles. “Comedown” and “Glycerine” remain two of the band’s biggest hits to date, each reaching No. 1 on the Billboard Modern Rock Tracks chart. Both tracks also entered the Billboard Hot 100, reaching No. 30 and No. 28, respectively.

Sixteen Stone received mostly positive feedback from music critics, calling their sound impressive, not unlike their Seattle Grunge counterparts. In later years Bush would distance themselves from the familiar Grunge sounds with experimental releases such as Deconstructed and The Science Of Things.

In April 2014 Rolling Stone placed the album at No. 39 on its “1994: The 40 Best Records From Mainstream Alternative’s Greatest Year” list. A month later, Loudwire placed Sixteen Stone at number eight on its “10 Best Hard Rock Albums of 1994” list. In July 2014, Guitar World placed the album on its “Superunknown: 50 Iconic Albums That Defined 1994” list.