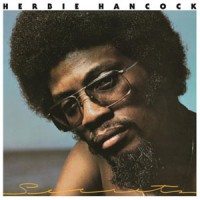 'Secrets' (1976) is a Jazz-Funk fusion album by acclaimed keyboard player Herbie Hancock. Following up on his previous album 'Man-Child', the album again features Paul Jackson on bass, and reedist Bennie Maupin continued to provide most of the solos alongside Hancock. 'Man-Child' had seen the addition of electric guitar to Hancock's sound, and 'Secrets' saw the guitar's place in the arrangements rise to crucial importance throughout. The flamboyant rhythm guitar contributions of top Motown session musician Wah Wah Watson are a particularly notable feature of the album.

Where 'Man-Child' was evenly divided between up-tempo and laid-back tracks, 'Secrets' emphasised the more mellow, softly rounded mood. Even the more up-tempo tracks, "Doin' It" and "Cantaloupe Island", are suffused with a relaxed Caribbean influence, and overall the album tends towards restrained, rolling grooves rather than overtly high-energy funk. Appropriately, Hancock spent much of his time using the mellow tones of the Rhodes piano, and took advantage of the new polyphonic synthesizers to contribute thick pads, foreshadowing ambient music.