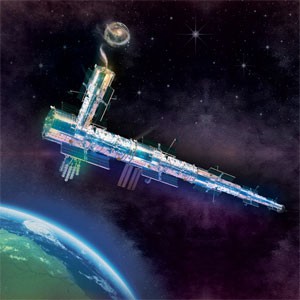 Tripping the Light fantastic courtesy of Night Flights, a new San Franciscan take on the path taken by the likes of Schulze / Tangerine Dream / Cluster / Eno and other doyens of the space-synth-riff float.

Night Flights is a recording project of lo-fi, ambient, synth-driven, soundscapes. Consisting of members of the band Carlton Melton and Mastered by John McBain, Night Flights is a collection of sounds prepared 'for headphones only'. It is very much influenced in spirit by the 1980's late night television series 'Night Flights'. Rich Millman - synth and guitar; Andy Duvall - galaga-guitar on 'alpha jerk'. Recorded and mixed by Rich Millman, Mastered by John McBain at Taylor Street Studios. Art by Kaveh Soofi

Its not like this hasn’t been done before, but Agitated hasn’t released anything so chilled and spatial…and after the year we've had, this 40 minhutes from Night Fligths de-bugs the sytstem and sets our mind straight!

This is the ideal comedown record for the concerted psychedelicist. Freak on my flotation tank flag wavers. 500 only 12” vinyl, clear orange vinyl at that.