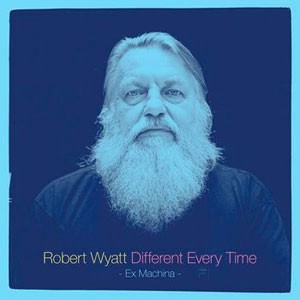 Domino are proud to release ‘Different Every Time’, a new compilation album of the works of Robert Wyatt.

Curated by Robert together with Domino and biographer Marcus O’Dair, the two volume (available as a double CD and two separate double LPs) album features ‘Ex Machina’ (this LP), the ideal introduction for the Wyatt novice, compiling tracks from Robert’s entire career to date and acting as a companion to O’Dair’s new biography, also titled ‘Different Every Time’.

Volume two (available separately) brings together the best of Robert’s collaborations and guest appearances or, as Robert has it, ‘Benign Dictatorships’, including some very special oddities and rarities available here for the very first time.

Starting out as a drummer for Soft Machine, sharing bills with Pink Floyd and Jimi Hendrix, Robert Wyatt blended Bohemian and jazz and brought it to the 60s rock scene. Focusing on singing and songwriting, he embarked on a unique solo career which earned him a loyal European following. Admired by his peers and with a career spanning five decades, he has collaborated with Bjork, John Cage, Brian Eno, Scritti Politti, David Gilmour and Hot Chip to name but a few, many of which are featured here.