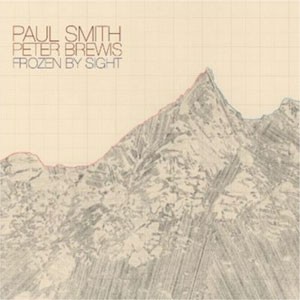 Drawing inspiration from disparate musical and poetic sources, two Mercury Prize nominees have come together in a playful departure from their respective work with Field Music and Maximo Park. Based around text from Paul Smith’s travel writing and Peter Brewis’s chamber-band arrangements, the pair have collaborated on a suite of songs, creating a restrained yet richly descriptive soundworld.

‘Frozen By Sight’ evolved from a festival commission for new work which saw the pair employ the skills of a string quartet and double bass player. Smith says, “We allowed the words to guide where the music was going in order to break free of more traditional pop structures.” Brewis also adds, “We wanted to touch on a point somewhere between composition, songwriting and improvisation, but we also wanted to keep a sense of humour and a sense of the everyday.”

After performing the work at the inaugural Festival Of The North East in late 2013, Smith and Brewis began work at the Field Music studio in Sunderland with David Brewis - Peter's brother - acting as co-producer. Integral to the sound of the record are the distinctive performances of the band: David’s dynamic push and pull on the drums, John Pope’s wandering, melodic bass playing, the precision and drama of Ed Cross’ string quartet and the sonorous palette of Andrew Lowther's tuned percussion. Brewis reinforces the arrangements with smatterings of piano while Smith features as a highly individual singer / guitar player.

The music wraps itself around the words and the places they chronicle. The locations become tangible; from their home towns in North Eastern England to more far-flung destinations. Characters appear, such as the diminutive L.A. streetcleaner going about his work in the song of the same title, or the romantic old couple “digging their forefingers in freshly-soaked sand” in ‘Santa Monica’.

The notion of discovery is everywhere in these songs, with ‘Trevone’ being a perfect example of a visual journey where the wanderer can take a “sidestep and the whole world appears.” Its uncanny Cornish imagery is mirrored by the unusual musical touches that coax the song from a sparse beginning to an uplifting, magical conclusion.

‘Frozen By Sight’ is a rare piece of music that quietly announces the arrival of a potent new collaboration.

The LP features 180g vinyl in a gatefold sleeve with digital download code.