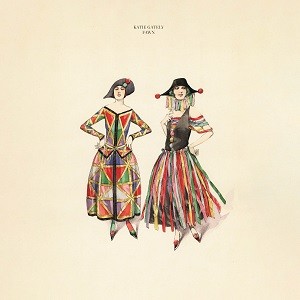 American experimental musician and producer Katie Gately is up to mischief on her new album Fawn / Brute, 11 songs of innocence and experience exploring the light and dark of childhood energy following the birth of her first daughter. It is an album of two halves, that moves from the effervescence of early years to the defiance and turbulence of teenage angst.

"When I got pregnant, I had a lot of energy at first, but later on, my pregnancy was stressful and worrying, so the music got darker and darker: I was making angry music while I was supposed to be feeling maternal." The album is dedicated to her young daughter Quinn, born in 2021 – the track 'Fawn' is a love letter to her.

In typical maverick style, Gately plundered cartoon sound libraries magpie-like to build signature nests of sounds, integrating her own idiosyncratic sound recording strategies and sampling techniques, from shoeboxes to theremin and with a boisterous recurring saxophone.

The album opens with 'Seed', a track that contemplates the possibilities of new life, in forward marching step. 'Howl' was originally released as a single for AdultSwim, capturing the explosive energies of a sugar rush in a dense traffic jam of samples from dogs and animals to human screams. 'Cleave' is Gately's distinctive take on the archetypal teenage heartbreak pop song;' Peeve' plays with theremin samples to channel lyrical frustrations about minor irritations. 'Scale' and 'Meat' dig into anxieties driven by medical concerns towards the end of her pregnancy. Whirring motifs of 'Tame' are claustrophobic and maximalist, a final burst of accumulated voice and electronics before 'Melt' returns to the start in a love song, Gately style, that bends and whorls with brass samples and the whispered mantra: "mischief, mischief, mischief".