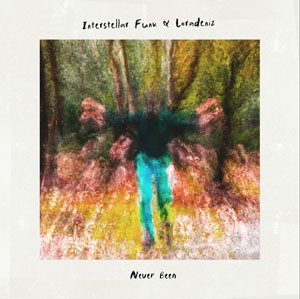 "Never Been" is the first collaborative release by Loradeniz and Interstellar Funk, who produced the EP at a Volkshotel artist residency in Amsterdam in 2021. The record examines the interplay of synthetic melodies and Loradeniz’s vocals, which are underpinned by meticulously crafted rhythms. Steeped in melancholy, many of the tracks on "Never Been" evoke the essence of departure, complex emotions and fading memories.

"Freefall" - which has already been caned by DJs last summer - opens with a solid bassline and crystalline melodies. An urgent kick and racing hi-hats intensify the composition, while the dominant topline brings to mind a rapturous dance at twilight. An allegory of communication, "Hidden Tongue" has Loradeniz pronouncing splintered vowels, like a malfunctioning public service recording, over a reverberated snare, deep kick and repeating glockenspiel figure.

"Fly Me In" begins with an arpeggiated melody, before slowly combining multiple electric accents and delicate vocals with spoken word passages exploring notions of escape. The heroic overtones of "Situational Lullaby" develop subtly with layers of synths reminiscent of mid-90s soundtracks, while "Lurking Orange" closes the release with its listless refrain and snake-like percussion.

Matt says: Brilliantly inventive and evocative synthscapes; considered song writing with a futuristic sheen. Original whilst also highly listenable. If Interstellar Funk & Loradeniz weren't on your radar yet - they should be now!