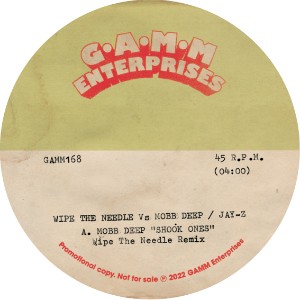 Back in the early days of GAMM they used to release hip-hop reworks of classic golden era favourites.

After tons and tons of disco, jazz, house and Latin reworks they thought it was time to bring it back to the streets of the American east coast with a three part 7" inch series produced (not edited) by the mighty Lee Gomez aka Wipe The Needle.

The beats are all brand new productions but you'll probably recognize the vocals. Over the 3 releases you'll hear shades of inspiration from classic producers like Pete Rock, DJ Premier, Dilla and DITC.

It almost sounds as if these are the original productions. No joke...it's that strong!!