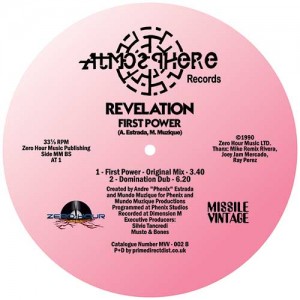 Finally re-released on 12” via New York’s Atmosphere Records, this 1990 House-Breaks Classic is back on vinyl.

Featuring in demand Original Versions of “First Power” and “Synth It” plus new Remix from Atmosphere founder Tommy Musto.

This release is first in a series of Lost New York Classics repressed on their original labels and powered by Missile Vintage and Prime Direct Distribution in London.

Matt says: Oft-overlooked and illusive little beast from the Atmosphere label which had a rather productive spell between 90-92.