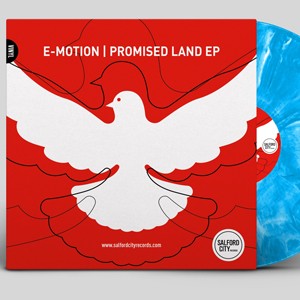 Another piano house classic from the early 90s is excavated from the vaults for our dancing delectation by the good folks at Salford City Records!

Originally released under the DJ Roy Silver moniker, the track is actually credited to one Nick Hussey - half of Awesome 3 who penned the bona fide hardcore classic - "Don't Go". The record was released on Rhythm Of Life and regular fetches over £50 2nd hand.

"Emotion" takes an eternity to drop; utilizing the first few minutes to create a shuddering proggy soundbed that really ratchets up the tension ahead of that huge piano line - which doesn't actually occur until halfway through the track. This has early Sasha written all over it. Hard electric dance music with that rushing euphoria tailor made for going right at it after a couple of garies.

"We're On The Move" is a tougher number, led by speaker-busting sub bass and plenty of hardcore tropes as it conjures up its frenetic electric groove. When the pianos start circling overhead it's the perfect moment of tension release; allowing serotonin to flow richly through our bodies and into the collective consciousness of the dancefloor..

Side B contains two mixes of a really nice downbeat number - perfect for keeping the vibe alive at the after party when energy levels have resided slightly. The original mix of "Promised Land" utilizes more of a hefty breakbeat while the ambient mix just hints at it - allowing the bass, vox, and twinkly synths to really hit home.

Killer reissue from the label - one of the best so far I reckon!

Part-EGive Me Your Love EP