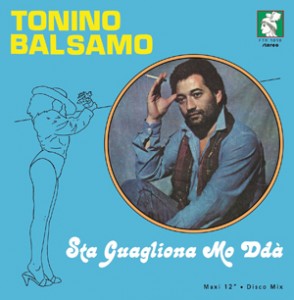 One of the rarest and most requested Neapolitan track around. Originally recorded in 1983 at the Rico Sound studios, the budget made available was not managed well by the artistic crew (money wasted on women, dinners and night clubs …) and it was not enough to be able to produce an LP on vinyl and only very few copies were produced on cassette. Occasionally some promotional vinyl copies appeared in flea markets, probably intended for radio stations of the time but to date neither the label nor the author remember ever having distributed or authorized this press. There are also counterfeit copies circulating through private-to-private sales channels. It was not easy to track down Tonino, namesake of his uncle Antonio Balsamo, master flautist of great fame, and it’s with great pleasure that we can finally announce, almost 40 years after its creation, the official release of "Sta Guagliona Mo Ddà" enriched by the instrumental version plus an unpublished variation on the original theme - "Voglie 'E Mare" - written by keyboardist Enzo Anoldo in the early 90s.