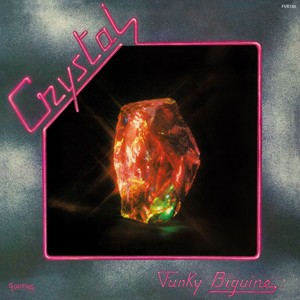 On the first side, you'll get the amazing track "Funky Biguine" by West Indies band Crystal. Originally compiled by Charles Maurice on French “Disco Boogie Sounds Vol. 2”, the original eponymous album still goes for crazy prices. And there's a reason for that: "Funky Biguine" will bring the heat on the dancefloor with its enchanting synth bassline, its West Indies influences and melodious Funk arrangement. Don't miss the synth solo in the end!

On the other side, you'll find a reissue of "Looking For You" by J.E.K.Y.S from the island of Réunion. The song has just started and you're already overwhelmed by the strong bassline and the sirens of this French boogie anthem -despite this one has English lyrics. Originally, you'll find it compiled by Charles Maurice on “French Disco Boogie Sounds Vol. 3”. Expect lovely harmonic progressions and perhaps a more spacey groove, as in these beautiful bridges leading to chorus where the lyrics blend perfectly with the synthesisers line and Fender Rhodes.

KH (Kieran Hebden)Looking At Your Pager / Only Human