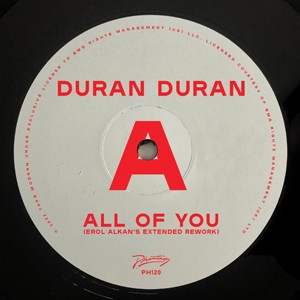 Having co-produced Duran Duran’s acclaimed fifteenth studio album, ‘FUTURE PAST’, Erol Alkan returns to recent single ‘ALL OF YOU’ to deliver a very special Extended Rework. Paying tribute to the band’s pioneering ‘Night Version’ remixes that tipped their earliest material towards the dance floor, this grandiose reimagining equally recalls Alkan’s beloved reworks from over the years.

Recorded with founding members Simon Le Bon, Nick Rhodes, John Taylor and Roger Taylor, ‘All Of You’ also features lead guitar from Graham Coxon and backing vocals by Barli. Blessed with the raw material, Alkan distills each element into a glorious disco odyssey totalling nearly ten minutes, an epic but sensual dance floor trip that already ranks amongst his finest work.
Phantasy is proud to release 'ALL OF YOU (Erol Alkan's Extended Rework)’ (backed with an instrumental version) on a limited run of 12” vinyl.

Matt says: Massively over-ordered, so likely to have gone when you read this. But don't panic! The label have already ordered a repress. That's what our 'wish list' button is for. More copies due in a couple of weeks or so, so don't dismay!